Marigold flowers, or a terry miracle in your garden
171

Marigold flowers, or a terry miracle in your garden

Marigold flowers grow by themselves in different countries of America, and the culture is also loved in Europe and in our country. Most often grown varieties with large flowers. 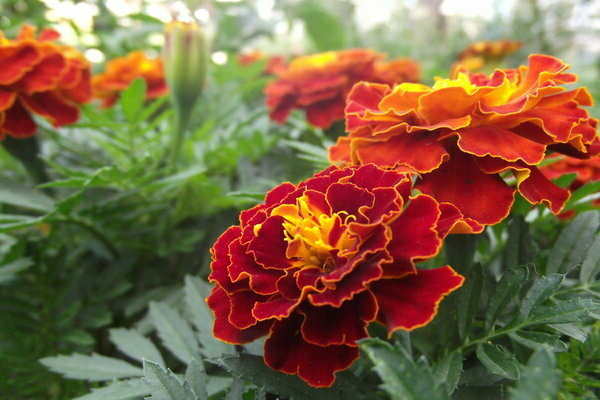 This culture belongs to the Asteraceae family. It has a straight, strong stem, the height of which can be small, and maybe more than one meter. The flower can be either single or not single. The plant has a fibrous root type and dissected leaves. The flower is collected in a basket, usually orange, yellow or brown. Marigold flowers begin to bloom from June to late autumn. The seeds of marigolds are black, very small. Shelf life for seedlings is approximately 3 years.

Not to say that marigold flowers have a pleasant aroma, like all aster flowers, but they look very impressive and neat. In addition, it is a completely unpretentious plant. Some species are generally able to grow near roads in unfavorable conditions on very lean soil. 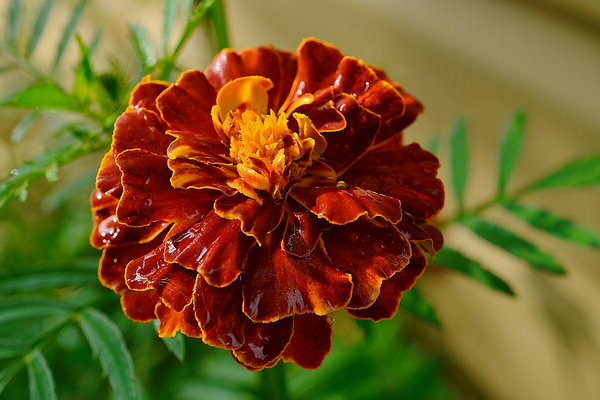 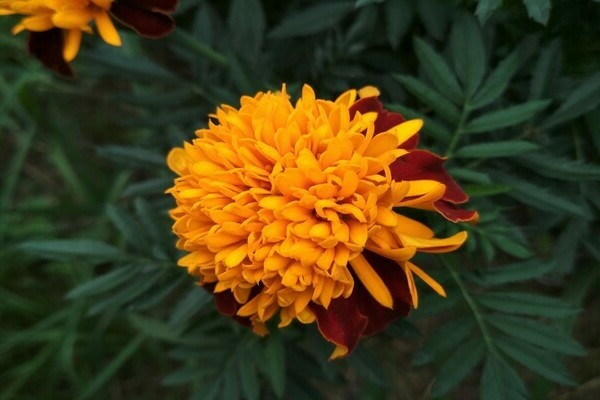 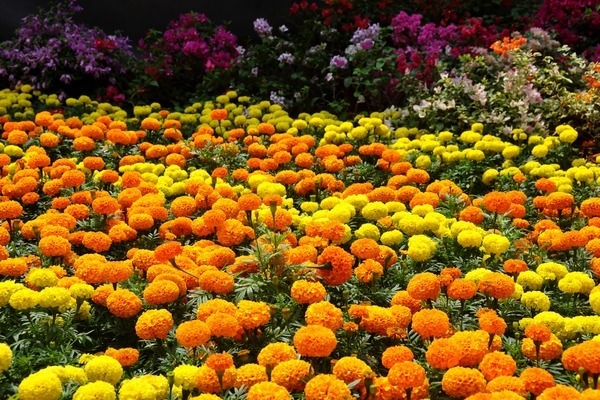 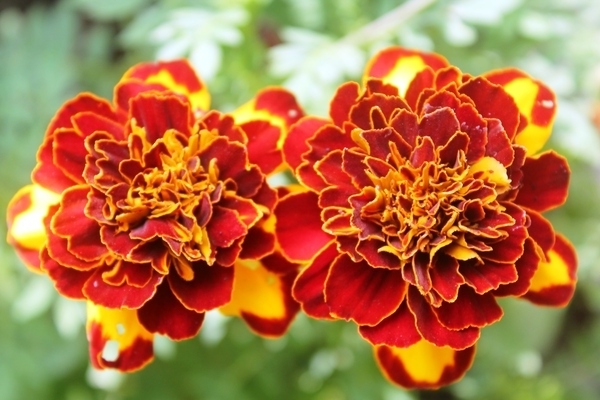 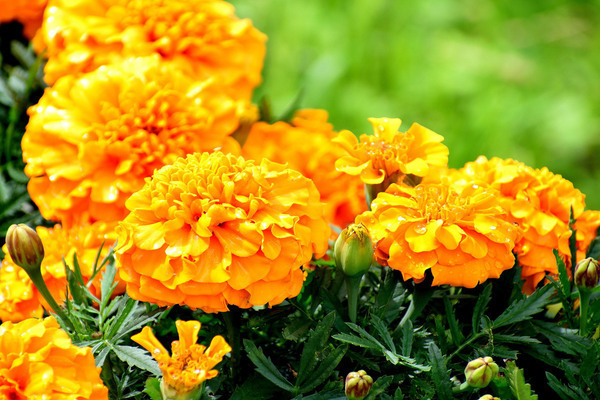 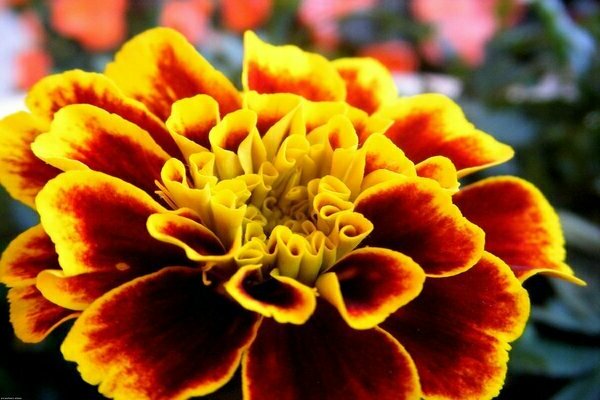 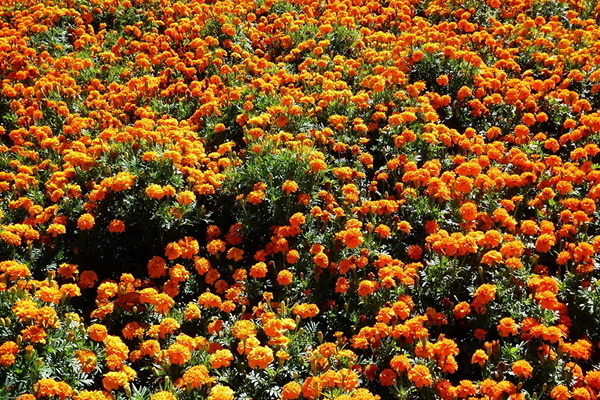 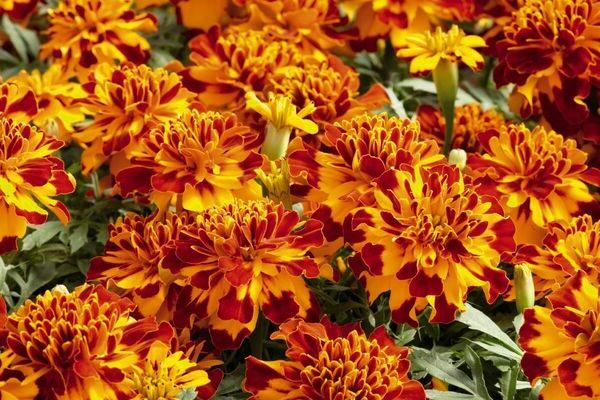 Like any plant, marigold flowers love the sun and open space, but even if you plant them in the shade, they will not be "offended" and will still bloom. The only, erect flowers will not grow in the shade. It is also better to plant marigolds on loamy, nutritious soils. In addition, the plants need to be watered regularly.

Despite the fact that marigolds are not demanding in care, the plant will bloom better and longer if you pay as much attention to it as to all other plantings on the site. So, if the soil is infertile, then it is necessary to apply fertilizers to the ground at least 3 times per season.

Marigold flowers can be planted on the site, at home, and on the balcony, as well as in any flower garden and flower bed, along paths and along the perimeter of trees. They look great as a stand-alone plant, and in composition with other flowers.

Marigolds are able to release special substances into the air that very well protect them from insect pests. But still, the plant is susceptible to some diseases. If signs of unhealthy flower occur, the plants should be treated with special preparations.

The plant is usually propagated with the help of seeds, planting them in open ground in late spring. So, seedlings will appear in a week. On cold nights, it is better to cover them with foil.

You can also sow seedlings in March or April, depending on the variety of marigolds. Then they will bloom in June. Some species are sown in mid-March. And some sow in early April. If these deadlines are met, flowering of all three species will begin in June.

It is not difficult to grow marigold seedlings in indoor conditions on the lightest window, and even better - in a greenhouse, where the plants will be the strongest. For seedlings to be healthy, you need loose, nutritious soil. It is also necessary not to forget about watering the plant.

Depending on the variety, marigolds better or worse take root in the soil around.

Marigold seeds can be sown even in a box, even in a pot. The main thing is to lay a good layer of drainage on the bottom, then a layer of soil is laid out, which must be tamped, and a loose layer of earth is poured on top.Thus, the box must still stand for some time without planting.

Since the seeds of these flowers are very small, they must be sown less often, leaving a distance between the rows of no more than 2 cm, or thin out the seedlings.

It is convenient to germinate marigold seeds before planting separately on a damp cloth wrapped in a bag. After lying in this form for several days, sprouts will appear, and the sprouted seeds should already be sown at a given distance. Seedlings are sprinkled with earth on top, then they must be carefully watered, and on top it is necessary to cover the ground, for example, with a newspaper. After the shoots appear, the container should be placed in a bright place, keeping the temperature around 18 degrees.

If the seedlings are often planted, then the plants should be dived, replanting them to a new place, deepening a little, which contributes to the growth of the root system. So, when three or four real leaves appear on the stem, the finished seedlings can be planted on the site. In time, this is approximately the end of May, the beginning of summer. If the variety of flowers is high, then the distance should be observed more between the flowers. Medium varieties are planted at a distance of 30 cm, and varieties with small flowers at a distance of 20 cm.

Do not be afraid, as marigolds easily grow to a new place at any stage of development.

The crop is harvested at a time when the flowers are actively blooming. This is about the month of July. It is necessary to cut the stem, stepping back 15 cm from the ground. The resulting essential oil is taken for processing, and the plants themselves are dried.

If you decide to collect seeds, timeliness is essential here, as seeds can crumble very quickly. After the plants are harvested, loosening is necessary.

Small marigolds are cut in early autumn when the plants are in bloom. The cut level is equal to the presence of leaves on the plant.

After the cut flowers are dry enough, the seeds are removed from them. This makes them easier to get.

If marigolds are grown for the purpose of obtaining essential oils, then the entire shoot above the ground is suitable for this. It is important that the harvest is fresh, as the oil can be obtained by steam stripping or extraction with volatile solvents. It is also necessary to observe that the plants are dried in the shade, since the sun has a detrimental effect on the composition and amount of essential oil.

In the flowerbed, marigolds are grown in three types. Flowers are rich in a variety of varieties

There are three types of marigolds that are grown in the plots:

An erect view of marigolds.

Despite the fact that their homeland is America, they, obviously by mistake, are called African. These are tall plants. The stem can be up to a meter in height. The flowers are large, double, yellow and orange. The diameter of the flowers can be either 7 or 15 cm.

There are giant varieties of them. In this case, the stem reaches 90 cm, high varieties with a stem a little more than half a meter and low varieties, the height of which is not more than 45 cm.

Here are the most popular of the upright ones. Antigua is a short plant, flowering, at the same time, with a large number of inflorescences, rather large in diameter, about 10 cm.

Gold Dollar. These plants are planted for decorative purposes in a flower garden and for bouquets. The stem reaches 120 cm in height. The inflorescences are terry, large, ball-shaped. The diameter of the inflorescences can be about 8 cm. The color is mainly dark orange, odorless. This variety blooms all season from June to October.

Golden light. Low stems up to 75 cm in height. According to the description, the variety is very similar to the variety described above. Only its flowers can be even larger, and the petals are twisted in a tube at the edges. The stems are powerful, have a ribbed surface, the leaves are large, rich green.

Lemon prize - 80 centimeter plants, ball inflorescences of which resemble a carnation flower. The diameter of the inflorescences is approximately 10 cm, the color is lemon. The plant also blooms all summer and until the first frost.

The next type is rejected marigolds. They are also called French. More compact crops. Their stem does not exceed 40 cm. Inflorescences are double and ordinary, but they are also very beautiful. The color is both yellow and orange and even brown. The size of the inflorescences is slightly smaller than that of the erect species of marigolds.

The golden head is also small plants with double yellow inflorescences. The variety blooms very beautifully, therefore it is also recommended for participation in flower arrangements.

Queen Sofia - flowers have a double color. Red-orange. It turns brown when exposed to the sun. The flowers are about 7 cm in size.

Lemon jewel - neat 30 cm flowers, well branched, have the shape of a ball. Leaves also grow densely. Inflorescences like a carnation, terry, small, lemon color. The variety blooms earlier than usual, and until frost. Able to decorate both flower beds, and looks successfully on the balcony.

Orange flame - small but spreading bushes, with an orange-red inflorescence.

And finally - marigolds are thin-leaved. This type of marigold has a stem no more than 30 cm, is distinguished by narrow leaves resembling lace and small non-double flowers. The color of the inflorescences can be yellow, orange, and red.

These crops are very conducive to light, sun and warmth. They are also grown through seedlings, which are transplanted into a flower garden after recurrent frosts. Some, even flowering plants, tolerate transplantation well and take root easily. Flowers resistant to drought, but not frost resistant.

Golden ring - the stem grows up to half a meter, thin stems, thin leaves and small inflorescences - all this resembles a fragile figurine. They look good on ridges and are also used for curbs.

Gnome is a small branchy plant that does not exceed 20 cm in height. Flowers are in great demand among flower beds and flower beds. It is also beneficial to plant plants on the balcony.

Lemon jewel - yellow inflorescences, bloom brightly and luxuriantly all season. The length of the stem is about 30 cm, the leaves are spreading, openwork.

Despite the fact that crops are invulnerable to pests, since the aroma of evaporated substances does not attract insects, there is still a possibility of plant diseases such as black leg, rot and other bacterial diseases.

First of all, the essential oil obtained from the plant is valued. It is rich in various substances and has a good aroma. This oil is applicable in perfumery and even alcoholic beverages.

There are countries where marigolds are used to prepare a variety of dishes, as a spice. By adding dried and pulverized herbs along with spices.

The marigold seasoning is combined with dishes based on beans, vegetables and also nuts. An obligatory addition to soups. So the taste becomes richer and more aromatic.

It is very beneficial to add seasoning to Georgian cuisine. Together with spicy fried pork, lamb on a skewer, with fish. But most of all, marigolds are recommended as an additive to chicken dishes. These are tobacco chickens, grilled chicken and other "chicken delicacies".

In addition, dried marigolds must be added to sauces.

Thus, you have familiarized yourself in detail with the types and varieties of this seemingly simple and popular flower. Marigolds are completely unpretentious to growing conditions, resistant to drought, and to transplantation, and to lack of care, and to pests, but, nevertheless, the plant blooms brightly, effectively, and, most importantly, all summer. And this cannot but be an advantage in order to occupy an honorable place in central flower beds, flower beds, rabatkas and living borders.