An ailment such as a bacterial burn can cause significant harm to plants and the future harvest. This disease affects not only apple trees, but also other fruit trees. In order to preserve crops and get a high-quality harvest, it is necessary to take timely measures to combat this dangerous disease.

Often in the garden or nursery, black and brown spots can be observed, actively spreading on the trunk, branches and on the surface of the leaves. This is a fire blight. These spots can affect both apple and pear trees, and plums and other fruit crops. Recently, cases of the disease and the rapid spread of this disease in the areas have become more frequent. 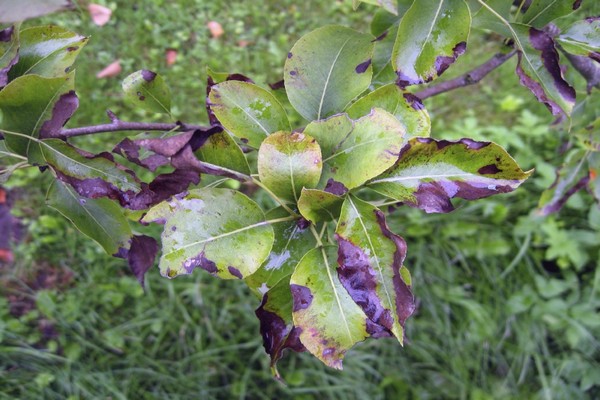 Bacterial burn of an apple tree: the mechanism of the spread of the disease

The disease "Bacterial apple burn" was identified many years ago in the 18th century. Now, after many years, no garden can be insured against the occurrence of a bacterial infection, which is carried by bacteria. The disease spreads quickly enough to healthy crops, despite the age of the seedling. Favorable factors for the development of the disease are the average air temperature, about 18 degrees and excessive moisture.

Plants prone to fire blight of the apple tree

Plants such as cotoneaster, hawthorn, apple tree, mountain ash, pear and others are most vulnerable to bacterial burns. Shrubs are also susceptible to attack by dangerous bacteria, especially raspberries, strawberries, roses and other fruit shrubs.

The varieties of apples that are more often affected by infection are Idared, Antonovka. From pears, varieties such as Conference, Lukashovka and others are distinguished. 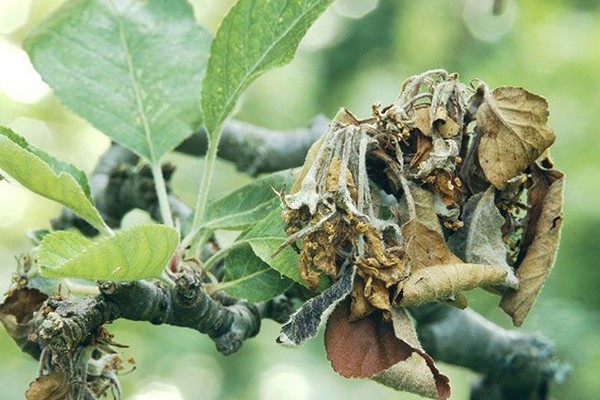 How to recognize a bacterial burn of an apple tree

Signs of the disease are visible to the naked eye. This is how the flowers fade first - they turn brown and may fall off prematurely. The leaves also turn black and curl. From the outside, they look like burnt ones. Black spots are also visible on the branches. The leaves of the apple tree turn dark brown.

Bacterial burn of an apple tree: a description of the disease

Bacterial apple burn very quickly passes from diseased trees to healthy plants. When the entire site is affected by a bacterial burn, the view of the site resembles a burnt forest. The resulting fruits also begin to darken immediately and hang in this form from the branches. In addition, the trunk and branches take on a very unattractive appearance. First, light droplets form, and then the bark is covered with a bloom resembling mold. After this, cracks and ulcers may appear.

With a dangerous and rapid bacterial burn of an apple tree, you must immediately fight and take all measures to destroy it. If this is not done, then in a year or two you can lose all the vegetation. 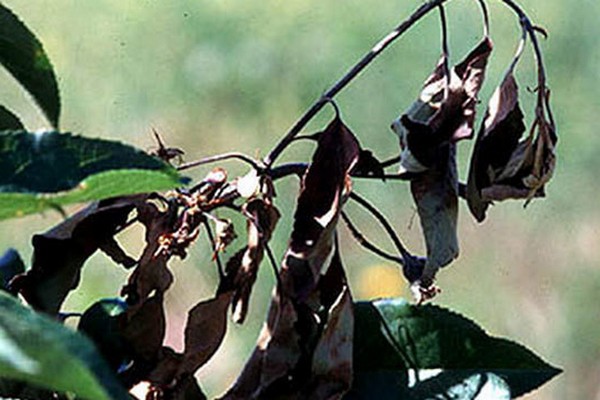 There are several reasons why it can be very difficult to identify the disease. Since the movement of infection is directed from the top to the roots, it is impossible to immediately notice the signs of the disease, especially when it comes to a tall tree. When most of the tree is affected, it is unlikely that it will be possible to save it.

Sometimes you might think that darkening of leaves and flowers is a common drying out. And then usually gardeners increase watering, thereby provoking a greater development of the disease.

In addition, darkening on the bark when attacked by a fire blight can be confused with other similar diseases, for example, such as necrosis of the bark. Here, an accurate diagnosis can only be made by laboratory means. 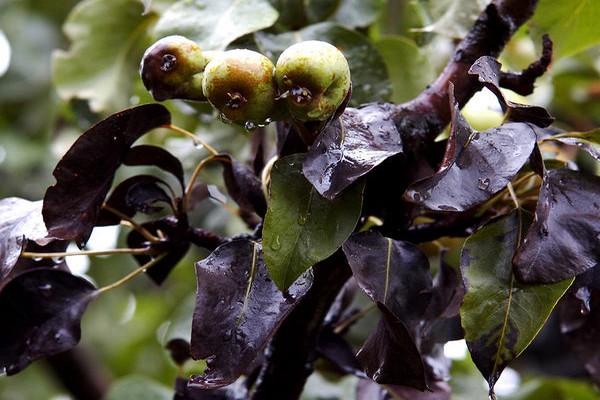 Since a bacterial burn of an apple tree is very difficult to notice and even more so to cure, it is better to carry out timely preventive measures. Here are examples of some of them:

It is necessary to remove by the root all wild trees and shrubs growing nearby, which can easily become the cause of the spread of infection.

It is recommended to periodically apply insecticides, since in addition to protecting against pests, the preparations prevent the infection of plants with infections.

Plants should be carefully examined, inspecting both the bottom and top of the trees, as well as the flowers during the flowering period. If signs of illness are detected early, there is every chance to save the tree.

Bacterial burn of an apple tree: how to treat? 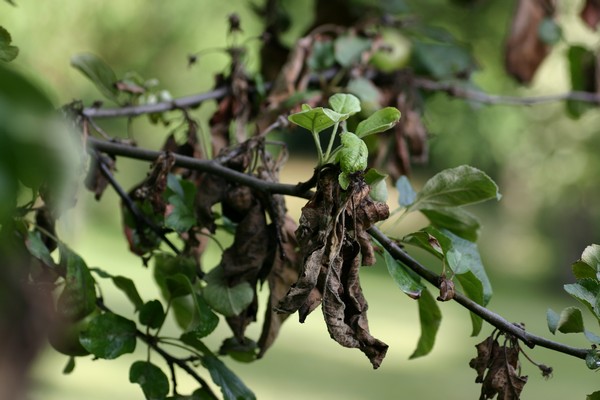 The effect of the measures taken to combat the disease will have a direct dependence on the stage of the disease and on the time of the actions taken. So, the tactics of treatment will differ in different cases. Below are the simplest methods of dealing with the disease and the most difficult ones.

Well proven in the fight against bacteria Azophos, Antibiotics, such as rifampicin, gentamicin, kanamycin and others. Nalidixic acid is also used, diluted at the rate of 2 ampoules per 5 liters of water. Plants should be processed in late spring or early summer.

If you see signs of the disease in the flowering stage of the tree, then you can carry out antibiotic treatment at least 3 times every 5 days. Here, the use of streptomycin, tetracycline is appropriate.

Also, during the flowering period of the tree, you can treat the plant with a weak solution of Bordeaux liquid, which, of course, can cause leaf burns, but this is better than a bacterial burn. You can carry out several treatment procedures with preparations containing copper or apply Abiga-Peak at a concentration of 0.3-0.4%. 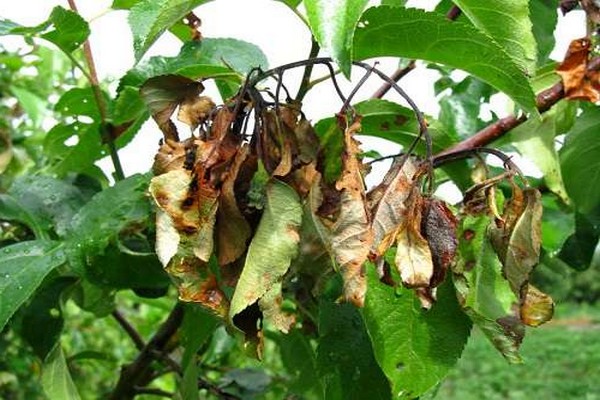 If nothing can be done, then the diseased tree and all crops around it should be uprooted, even if they show no signs of the disease.

The removed plant must be burned, without transferring them anywhere, so as not to spread bacteria. And the tools that were used must be treated with antiseptic drugs or formalin.

"Antonov fire" or bacterial burn is a dangerous infection that is difficult to recognize. Treatment of a bacterial burn of an apple tree is also not an easy matter. The main thing here is to carefully examine the plants on the site and take the necessary measures at the first sign. This is the only way you can protect the crops in the garden and get the desired harvest.

Treatment of a bacterial burn of an apple tree: video

Tomatoes in a greenhouse: how to grow properly

Aruncus (volzhanka): planting and care, ALL the secrets of growing, photo 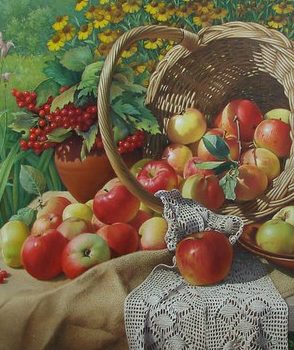 Apple varieties for the Urals
Thanks to breeders from all over the world, at the moment it is possible to grow almost any garden ... 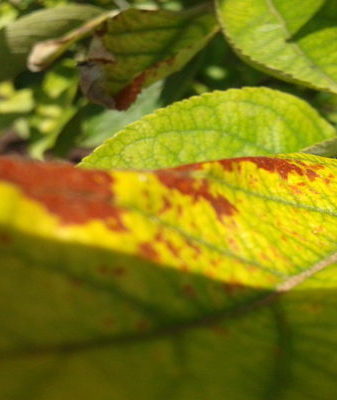 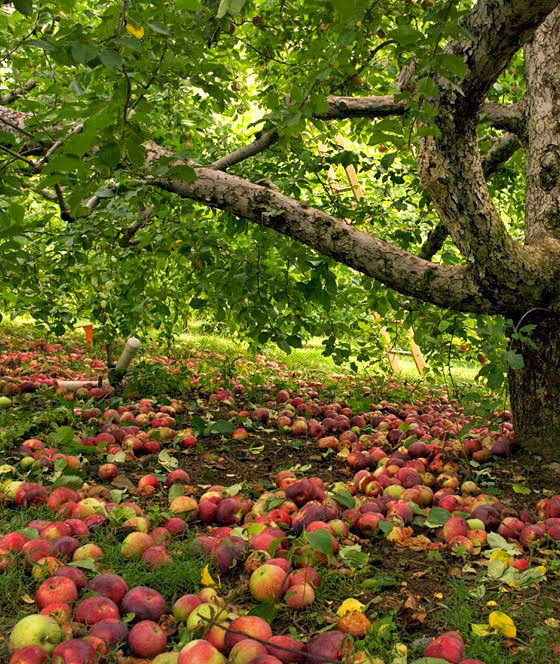 Saving the garden from fruit rot
As a rule, the causative agent of fruit rot is the mushroom Monilla fructigena Pers ex Fr., which ...
×