Seasonal gardening: helping plants recover from winter. Fertilizer selection. Protection of trees and shrubs from pests and spring frosts. Almost throughout Russia, spring comes into its own in April. The second half of April is considered the most active for sap flow and kidney swelling. At this time, a large number of things are lined up in front of the gardeners that must be completed before the greens begin to appear. 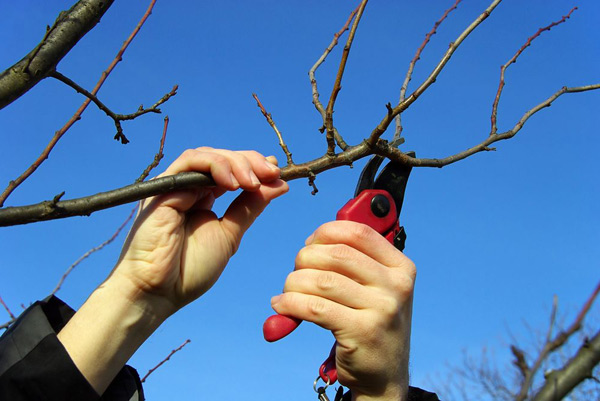 Tidying up shrubs and trees

At this time, it is necessary to start removing winter shelters from shrubs, such as raspberries and blackberries. Next, you need to weed and loosen the soil, remove old and dry twigs. Before the buds awaken, raspberry bushes need to be tied up on trellises so that the sun gets well on its branches. Such tying will make it easier to care for raspberries, and the harvest will begin to ripen ahead of time.
In fruit-bearing trees, you also need to remove damaged branches and clean the trunk of dead bark. If there are wounds from rodents, then cover them with garden varnish. If there is a hollow on the tree, it is cleaned, treated with a mixture of copper sulfate in a ratio of fifty grams per one liter of water. And then they are covered with cement. Cancer wounds must be covered with a mixture made of nigrol, molten paraffin and rosin. In a ratio of six to two to two. This mixture is spread on the wound and a gauze bandage is attached on top.

Places between trees and shrubs need to be cleaned of old leaves and twigs. Place the collected waste in a compost pit or incinerate. Before sap flow begins, it is necessary to prune trees and shrubs, remove damaged and dry twigs, and form the crown of plants. When pruning, places with a diameter of more than eight millimeters are lubricated with garden pitch. Pruning trees whose fruits are pitted, such as plum and cherry trees, are carried out in the fall.

When you start pruning shrubs, first remove all branches lying on the soil. It is necessary to inspect each bush. If on the bushes, the buds resemble a barrel in shape, this means that a kidney mite has formed there. Such buds need to be removed and burned, but if such buds are throughout the branch, then you need to cut it off at the base. Also get rid of shoots that have been damaged by powdery mildew and glass. Old plants, which are more than ten years old, also require rejuvenation in the form of removing several old branches. Old twigs are very recognizable, they have thick flaky bark and are darker in color than others. Trees infected with lichen are treated with 4% iron sulfate.

Spring is the most optimal for planting seedlings. It is usually produced in mid-spring. It is necessary to follow the rules when landing.Otherwise, the seedlings may not take root, or they will have few fruits or may completely die.

Planting rules: a hole for a future seedling needs to be dug out in two weeks. Next, add humus or compost to the bottom, pour from two to three buckets on one hole. At the bottom of the hole, you will need to install a stake, to which you then tie the seedling. The roots of the seedling must be straightened and covered with fertile and nutritious soil without the formation of voids around. When you fill up the soil, compact it a little. After covering the roots by fifteen centimeters with earth, pour the seedling with two buckets of water and cover the rest of the earth. After planting the seedling completely, you need to file the peg to the first lower branches of the crown. This will protect against wind damage. You cannot pour fresh manure on the bottom of the hole, it can only be used on the top layer of the soil.

After the snow melts, the garden is filled with a variety of pests, so you need to have time to treat the plants with insecticides before the buds swell. You can use a nitrafen solution for processing, it is diluted with three hundred grams per ten liters of water. You can also use drugs such as malofos, intavir and others. It is necessary to process not only the branches of the trees, but also the soil around the tree. If a scale insect is found on the trees, then vegetable oil will help well against it. You just need to lubricate the bark. When the sun warms with its rays, this will clog the insect, and it will die. The stems are usually whitened with slaked lime, diluted in a ratio of three kilograms per ten liters of water with the addition of one-second kilogram of copper sulfate. To increase the density, clay or mullein can be added to this mixture.

Protecting ourselves from spring frosts

During the formation of the ovary, frost may also occur, so you should take care of this in advance. Smoke is considered the most affordable way. The creation of smoke retains the heat that the earth accumulates in a day. For smoke, you need to prepare in advance brushwood, old fallen leaves or peat.

By completing these works in April, you will avoid less hassle in May, since this month is the most time consuming.

Dahlia varieties, with photos and names. Description of varieties