The violet is one of the most beloved houseplants, with many varieties. Since the interest in this flower is only growing, breeders are constantly developing new species and varieties of violets. There are both miniature species and giant plants, violets that develop in the form of rosettes or those that have long hanging shoots - an ampelous group. It is the ampelous violets that are becoming more and more popular, because with their help you can transform any corner of the house by planting various varieties of this species in hanging pots. Next, let's dwell on the characteristics of this plant and find out the features of growing ampel violets. 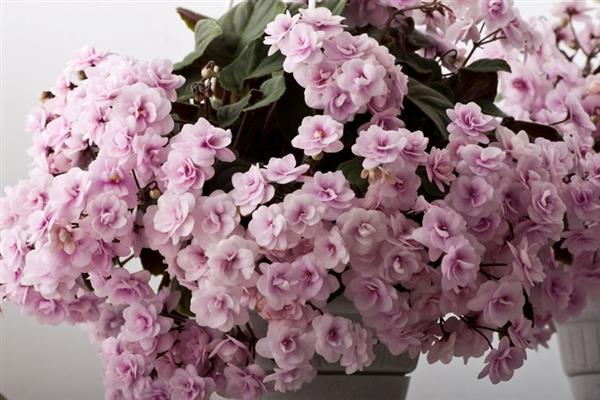 A distinctive feature of these violets is the form of development. Ampel violets have elongated hanging shoots, on which many rosettes with peduncles are formed. However, among the varieties of ampelous violets, there are those that develop on one shoot growing upward.

Ampel violets are the result of crossing of two types of plants - rosette violets and natural Saintpaulias, which are distinguished by the ampel structure.

For the first time this species was obtained in the middle of the last century, but Russian growers got acquainted with them much later. They owe their appearance to the breeder Frank Tinari. By the way, many of their varieties are named after him (Tinaris Sky Blue Trailler, Tinaris Ceneva Trailler, etc.).

You can often hear another name for the species in question - trailers, that is, plants with several growth points and elongated hanging stems.

Another reason for the growing popularity of trailer violets is their almost constant flowering. Indeed, unlike ordinary violets, ampelous species form significantly more rosettes and peduncles, which means that they bloom more magnificently and for a long time. From violets of this type, whole hanging gardens are created, which are absolutely stunning views. 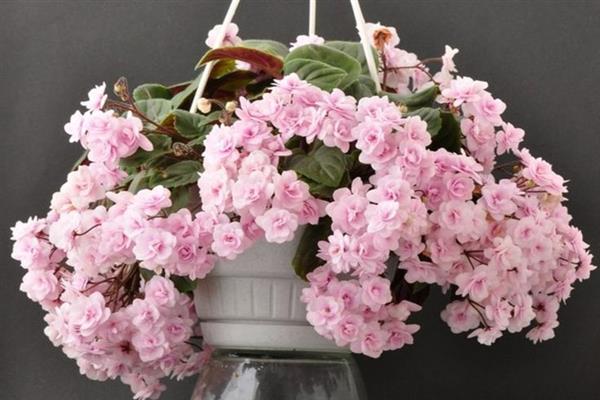 Breeders of many countries are working on breeding new plants. To date, the number of ampel varieties has already exceeded five hundred. Below, we give examples of several varieties classified by flower growers as the most decorative. 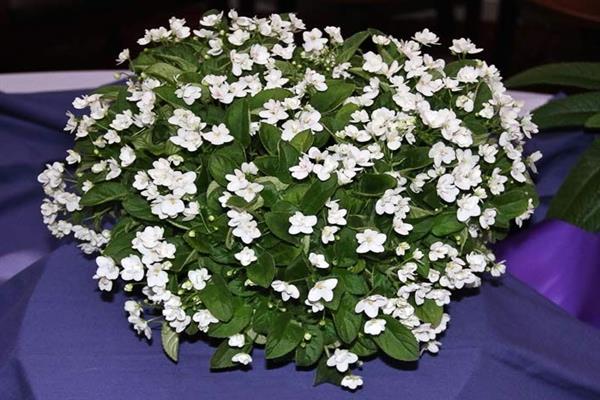 Trailers (ampel violets), like other types of violets, prefer very light soil, which should contain such baking agents as perlite and peat. Over time, given the high moisture content and looseness of the soil, its volume decreases markedly. In this case, it is enough just to add the soil mixture to the pot. Additionally, complexes of minerals can be added to the added soil mixture.

For planting ampel violets, you should choose low containers, because a significant part of the root system of trailers is located on the surface, and a large volume of a pot is not required for hanging plant shoots.

Trailers are transplanted no more than twice a year. As a rule, the transplantation of violets is due to the need to divide them.

Subject to the planting conditions, violets will grow quite actively, and in order to preserve the decorative appearance of the plant, you can resort to the following methods.

Timely re-rooting of outlets will help to avoid exposing hanging shoots. Usually, the need for it arises after 8 - 9 months from the beginning of active growth of the violet. At the same time, each plant has its own characteristics, depending on which, the given period may be more or less.

Ampel violets, with one stem growing upward, form in the form of a bush. When the shoot reaches a certain length, it is laid on the soil surface in the form of a semicircle. The sockets on it, over time, will take root and start growing. The result is a lush bush.

Also, many growers practice growing several plants of various varieties in one container with a variety of flower colors. Considering the small size of the trailers, the plants in no way interfere with each other's development. Well, and talking about the high decorativeness of such pots, of course, is superfluous. 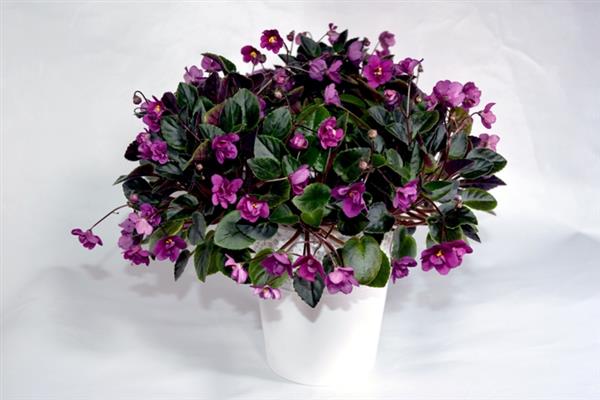 Ampel violets are light-loving plants.The optimal daylight hours for proper growth and development should be at least 10 hours. Therefore, in winter, if possible, plants should be supplemented using fluorescent lamps. It is best to avoid direct sunlight on the plant.

The most suitable temperature regime for growing ampel violets of trailers is + 19 ... + 22 degrees. The plant reacts negatively to drafts and sudden changes in temperature. But small temperature fluctuations, by one or two degrees, on the contrary, will stimulate the flowering of violets.

In order to determine the amount and volume of watering, it will take some time to observe the plant. However, in any case, it is important not to allow waterlogging of the soil, which is fraught with rotting of the roots. It should be remembered that high soil moisture is facilitated by a large volume of container, because the more soil mixture, the slower it dries. The same result will be the case in the case of high soil density, as well as the absence of a drainage layer.

When applying dressings, it is necessary to focus on the characteristics of a particular variety. It is important that the fertilization schedule assumes regular feeding, since too long breaks negatively affect the proper development of the plant.

When growing ampel violets, you can encounter damage to plants by insect pests, as well as some diseases. 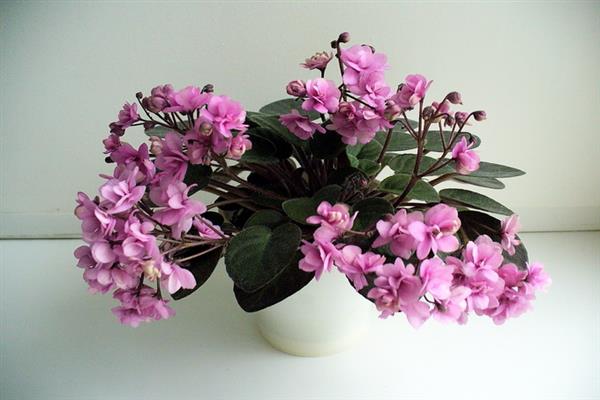 Root nematodes are among the most dangerous pests of ampel violets. This insect penetrates the plant tissue, sucks out sap and releases toxic substances. It is almost impossible to immediately detect the presence of nematodes, this is their danger. Violets attacked by a pest wither over time, begin to rot and die. It is impossible to cure a plant affected by a root nematode. To reduce the likelihood of its appearance, it is necessary to correctly approach the choice of soil, excluding the introduction of soil from greenhouses and greenhouses into the soil mixture.

Another fairly common flower parasite is thrips. Unlike nematodes, it is clearly visible on the plant. This pest does not allow the development of flower buds, as a result, the decorative effect of the violet is noticeably reduced. In the fight against thrips, the removal of all flowers and buds, transplantation of the plant into a new soil and its two-fold treatment with an insecticide solution will help.

If you notice that the buds are deformed and shed, it is possible that the violet was attacked by a strawberry mite. Such drugs as "Actellic" or "Aktara" will help to rid the plant of its presence. The drugs should be used in strict accordance with the instructions.

In addition to insects - pests, the plant can also be affected by fungal diseases, such as gray mold or powdery mildew. When signs of disease appear, it is necessary to treat the violets with insecticides as soon as possible. 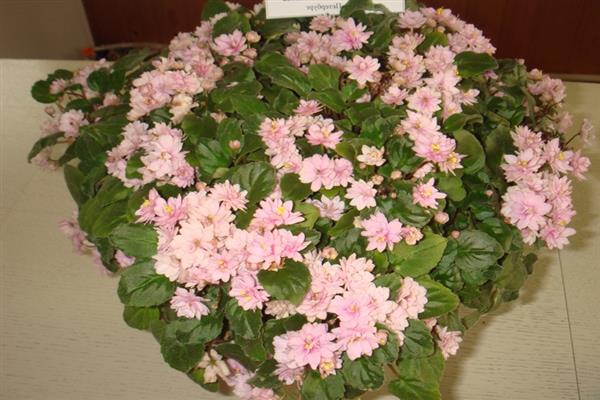 The most common, and perhaps the simplest way of propagating ampel violets is leaf cuttings.

Several leaves are carefully cut off from the mother plant, then the cut is slightly powdered with a preparation that stimulates root formation, and the cutting is placed in a loose substrate, a peat tablet or sphagnum. Next, you should create greenhouse conditions by covering the stalk with a jar, plastic container or a simple plastic bag. After about a month, the stalk will give roots and it can be transplanted into a permanent container.

In addition to cuttings, ampelous violets, trailers are propagated by rooting of side shoots. Florists note the lower efficiency of this method, as well as a decrease in the decorative appearance of the plant.

Another way to reproduce ampel violets is seed. This option is the least common, because it requires more time, effort and patience. Light and loose soil is suitable for germinating seeds. Violet seeds are spread over the surface of the moistened soil, pressing a little, so that during subsequent watering they do not move. Then, the crops are covered with glass or foil and left in a room with a temperature of + 22 ... + 25 degrees. The first shoots will appear on the surface after about 3 - 4 weeks. And the subsequent care of violet seedlings is no different from growing any flower seedlings. It is important to provide sufficient lighting, timely and moderate watering, as well as the optimal temperature regime for the proper development and growth of young ampel violets.

Tomatoes in a greenhouse: how to grow properly

Microelements necessary for a tomato - a list of the most necessary 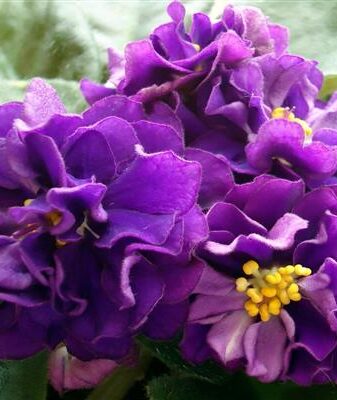 Violet Black Pearl
It is not just that a culture like violet is preferred by a large number of gardeners. These... 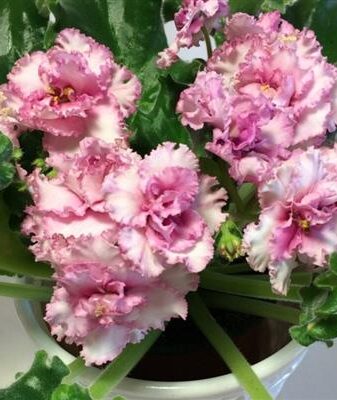 Violet Wind Rose
Violet Wind rose is considered a rather beautiful and beautiful flower, although at the same time very ... 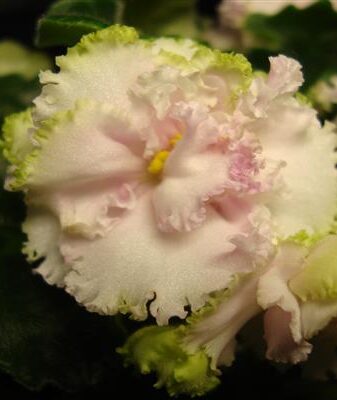 Violet Dandy
The violet belongs to the Gesneriev family, a herbaceous plant growing in eastern Africa ...
×